Is your little one a big fan of the Milkshake! on Channel 5? Bethany certainly is, she loves watching Paw Patrol and Peppa Pig on there.
We have teamed up with them to celebrate the launch of the brand new Milkshake! Fantastic Fun DVD that has been released in stores this week. 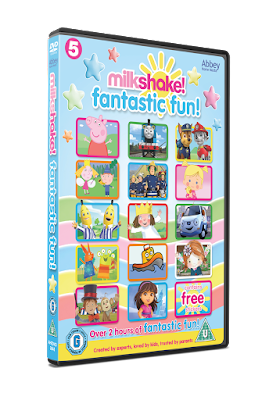 Your little one can join Milkshake! favourites including, Peppa Pig, Ben and Holly’s Little Kingdom, Fireman Sam, and Bananas in Pyjamas for over 2 hours of fantastic fun!

Fans of Milkshake! everywhere will love this collection of their fantastic favourite friends.

Peppa Pig – Join Peppa, the cheeky, lovable little piggy as we follow her adventures with her brother George, Mummy Pig, Daddy Pig and all their friends. Peppa loves dressing up and playing games – and jumping up and down in muddy puddles! In Hide and Seek Peppa thinks that George is too easy to find.

Thomas & Friends – All aboard for more fun with Thomas and his trusty pals Edward, Gordon, Henry, James, Percy Spencer and, of course, The Fat Controller. In Spencer's V.I.P, after the bigger engines tease Edward for being old and unreliable, he proves them wrong when he rescues Gordon who is stuck on a hill.

Paw Patrol – the hero pups of the Paw Patrol help solve the everyday problems of the people of Adventure Bay. In Pups and the Kitty-Tastrophe, Ryder and the Paw Patrol rescue a lost kitty from the bay, but who will save them from all the mayhem that she causes?


Ben and Holly’s Little Kingdom - Young fairy princess Holly and her best friend, Ben the Elf, live in the Little Kingdom, a tiny land where flowers and grass rise above the tallest towers. In The Party chaos ensues when the twins invite their little friends to the castle for a birthday party.

Chloe’s Closet – four-year-old Chloe Corbin has a very special secret – a magical closet which transports her, her friends and her toys to magical worlds. In Musical Chairs, Chloe, Lil and Mac travel to an Indian jungle where they help Miss Elephant learn how to be gentle when she plays with her smaller friends.

Bananas In Pyjamas – there’s always laughter and fun with the Bananas and the characters of Cuddlestown. The Teddies, Rat in the Hat, Topsy the kangaroo, Charlie the monkey and wise old dog Bernard join their singing yellow friends. In We Love Cuddlestown, the Bananas are helping everyone to decorate their houses, but where are their own decorations?

Little Princess – Created by Tony Ross, Little Princess is very curious and delightfully stubborn when things don't go her way! Determined and often demanding no-one can stay angry with her for long. In Sports Day, the Little Princess is less than delighted to discover that her teammates are Scruff and the Admiral. But which team will win?

Wanda and the Alien – based on the popular books by Sue Hendra about accepting differences and sharing, Wanda makes a new best friend – an alien. In Non-Pop Bubbles
Wanda is showing Alien how to blow bubbles. He has never seen bubbles before, and doesn't want them to pop!

Toot the Tiny Tugboat – Life on the high seas is a whirl of fun and adventure when you’re a little boat with big ideas. An energetic tug in his first year of service, Toot works and plays with his ocean-going friends. In Toot's Talent Contest, Toot hosts a talent  contest but Pop the ocean liner doesn't know what his talent is. Can the other boats persuade him he has a very special talent?

Lily’s Driftwood Bay - Driftwood Bay is a special island that exists in the imagination of Lily, who creates a world of adventure and friendship from different treasures she finds washed up on the beach. In The Dance-Off Lily and her friends help Salty prepare for a  dance challenge at the Driftwood Bay ceilidh.


Toby’s Travelling Circus – Roll up! Roll up! Toby is the best circus ringmaster in the world and is joined on his adventures by his band of circus performer pals. In If the Boot Fits, the search is on for the culprit when someone steps in wet paint and walks all over the new circus poster.

Dora and Friends – Dora the young adventurer now lives in the city of Playa Verde, a beautiful metropolis by the sea. She and new friends Alana, Emma, Kate, Naiya and Pablo explore the city, searching for portals to magical worlds full of surprises and challenges to overcome. In We Save a Pirate Ship! Dora and her friends have to rescue an old ship in order to save the Pirate Festival, but some crafty pirates want to take its treasure.
Follow Milkshake here
To be in with a chance of winning this great prize simply enter via the Rafflecopter below.

This giveaway is open to all UK residents only.
This prize is non-transferable, cannot be exchanged and no cash alternative will be offered.
A winner will be chosen at random via Rafflecopter and announced on this Competition page, via Twitter and Facebook.
The winner will be contacted by e-mail, If they do not respond within 28 days another winner may be chosen.
Any non delivery is unfortunately not my responsibility, However I will try to help with any non delivery issues.
Competition ends on 05/11/2015
Please Follow my blog with Bloglovin if you enjoy reading my posts.
Posted by Beth Bear at 12:52